The episode opens up to the beautiful surroundings of Bikini Bottom.
French Narrator: “Ah there’s nothing like a quiet, peaceful and normal ngày in Bikini Bottom, as local marine life go about their normal and tranquil routine without any unexpected….
The narrator gets interrupted when a mysterious object with a feminine shape is hurtling towards the area.
French Narrator (surprised): “Oh it appears I’ve spoken too soon, let’s hope it does not hit something important!”
Now the mysterious object kept on hurdling towards Bikini Bottom, luckily for...
continue reading...
LEGEND OF THE BIKINI BOTTOM
posted by Enald
Credits goes to NesquickP
I really enjoyed đọc this Fanfic, it's a worth đọc for.
Chapter 1: Welcome to Bikini Bottom
I made this series a long time cách đây and forgot about it. So im re- uploading the series and will post as many new chapters as i can! This story has a lot of themes and story similar to Gravity Falls. It will have some similar plot points of other Spongebob episodes but with my own twist on the series with a mysterious turn! Hope bạn all enjoy! 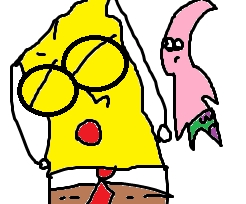 NNNNOOOOOOOOOOOOOOOOOOO!!!!!!
Spongebob:*yawn* good morning Gary!
Gary:Meow Meow Meow Meow Meow Meow (Can i just have my food?)
Spongebob:Ok Gary! *gets out Gary's Bowl and pours ốc, ốc sên food*
Patrick:*crashes through spongebob's wall* SPONGEBOB!!
Spongebob:what?
Patrick:MY PARENTS WANT ME TO di chuyển BACK IN!!!!
Spongebob:NNNNOOOOOOOOOOOOOOOOOOOOOOOOOOOOO!!!!!!!!!
Gary:MEOW MEOW!!! (SHUT UP!!!)
Spongebob:Patrick! bạn can't go! who will take me to the tiếp theo Jellyfish Expo? *shows SB and P at the Jellyfish Expo
Hazal:Spongebob?
Arjin:What Happened?
Patrick:My parents want me to di chuyển back in!
Arjin:Then who will i date? i don't wanna ngày some...
continue reading...
1
Spongebob's Love: Chapter 8
posted by melisa583
The tiếp theo Morning
*knock knock*
Spongebob:Who Is It?
Hazal:It's me!
*answers door*
Spongebob:Hi!
Hazal:Hey
Spongebob:the Jellyfish convention is still in town, wana go?
Hazal:sure!
~*~*~*~*
So they went. But Plankton was also ploting another sceme
Plankton:hehehe
Karen:What now Plankton are bạn choking on your own spit again?
Plankton:no not again, I KIDNAPPED THE POWERPUFF GIRLS Z!!!
Karen:why don't bạn also kidnap the Powerpuff Girls?
Plankton:Oh yeah
Later
Plankton:now i'll do my same plan as yesterday and rule the world!!!! ALL HAIL PLANKTON!!!
meanwhile
Spongebob:hey! where'd she go? maybe Plankton got her again, COME ON PATRICK
~*~*~*~*
OH NO!!!
All girls:mmmph! mmph!
SpongeBob:at least i know thêm Karate hiya! *karate chops rope*
Powerpuff girls and Powerpuff girls Z:we will take it from here
Spongebob:OK! we are gonna go back to the Jellyfishing Convention
Narrator: well, that was nice 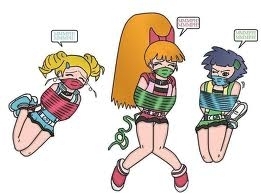 "At least i know Karate! hiya!"
3
Lời khuyên for Dating Spongebob
posted by nigahigarocks98
I tình yêu Spongebob. That's why I'm here, of course! But before putting all your hope on him, bạn should start liking other cartoon characters too. I have two boos! GIR and Spongebob, because bạn might want to have a fallback if Spongebob ends up dumping bạn like he did to Gary. So take my advice! Get a fallback hoặc fallbacks, and I'm sure everything will be fine. :) But good luck with Spongebob! And everyone else bạn may like in a cartoon! I'm sure it'll work out, but here is another reason. I'll give bạn some Lời khuyên for it, too. Spongebob may not like things that bạn like. If he asks bạn to go...
continue reading...
Fast Những người bạn Under the Sea
posted by aldrine2016
Blossom and her sisters, Bubbles and Buttercup were enjoying a day-off from crime fighting at the sea, water trượt tuyết with Blossom manning the boat.

Bubbles: Woo-hoo! Aloha!
Buttercup: [sighs annoyed] Seriously Bubbles, how many phút have bạn been uttering all those Hawaiian phrases?
Bubbles: Umm... Ever since we went to this ocean to have our day-off fun. So it might be 9 phút hoặc less.
Blossom: Guys, guys, let's not get a little annoying. Let's just have some ocean fun!

As Blossom finished her sentence, she saw a flock of seagulls flying towards her, knocking her, and a ngẫu nhiên bag she had been...
continue reading...
2
F.u.n. Song Lyrics spongebob squarepants
posted by karlyluvsam 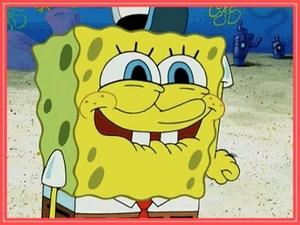 It's not about winning, it's about fun
What's that?
Fun is when you, fun is, it's like, it's kind of
Sort of like a, what is fun? I
Let me spell it for you

F is for ngọn lửa, chữa cháy that burns down the whole town
U is for uranium, bombs
N is for no survivors when you

F is for Những người bạn who do stuff to
Never, that's completely idiotic

Here, let me help you
F is for Những người bạn who do stuff together
U is for bạn and me
Try it
N is for anywhere...
continue reading...
3
Spongebob Quotes!
posted by spongesrule
QuotesMeow.

-Gary
Y'all better apologize, hoặc I'll be on bạn like ugly on an ape. 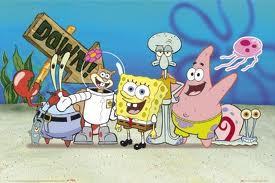 spongebob and friends
ME:HI I'M SIERRA BEAST
VALERIA:EVERYBODY KNOWS YOUR SIERRA.
SAURICE:HEY BOSS HOW COME WE'RE NOT IN THE STORY? AND WHY DOES SIERRA GET TO WRITE HER OWN STORY?
VALERIA:BECAUSE I'M TIRED AS HELL FROM nghề viết văn ALL OF MY STORIES,AND I'M GIVING HER THE EQUAL OPPERTUNITY TO DO HER OWN THING IN HER OWN WAY AND DON'T WORRY YOUR TIME WILL COME AND THE REASON WHY WE'RE NOT INCLUEDED TO THE STORY IS BECAUSE I HAVE NO IDEA WHAT OUR LINES WAS GONNA BE IF WE WERE IN THIS STORY.
SAURICE:OKAY ,THANKS BOSS.
VALERIA:NO PROB SO WHERE THEY AT?
ME:WHO?
VALERIA:THE GANG SPONGEBOB,PATRICK,SANDY AND THE ICE AGE GANG. WHERE....
continue reading...
6
Funny Moments In Spongebob
posted by awesomesonic
1. "Hey pal, didja walk out of Stupidtown?"

2. "You'll never pay me enough to act brotherly towards THAT guy." *Spongebob buffers his face*

3. "For the Krusty Krab!" *Runs while yelling loud to drop off garbage* [Gasping Intensifies] (Snap) "Piece of cake."

4. "I'm so close to solving this crime, I can almost TASTE it." *Licks Spongebob Pop* 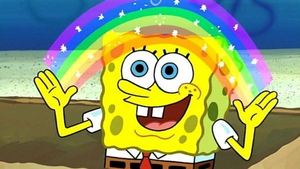 xin chào guys,A.M.S here with some great news.Spongebob is currently workin' at The Krusty Krab and it turns out awesome.Spongebob still doesn't have his driver's licence...but,will get his as soon as he calms down during the boating test.

He's been on T.V for only about 19 years now and he has been giving me thêm and thêm inspiration and some quotation studies.Spongebob became the very first Nicktoon to ever win thêm than one Nickelodeon's Kids Choice Awards in one setting.And as a reward.I would like to give Spongebob a 5 out of 5 stars and a perfect 10.

Well,that's all the time I have to tell you... 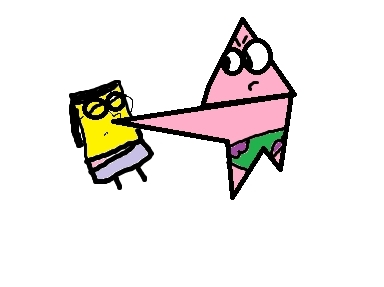 KARATE CHOP!
8
FUN SONG LYRICS
posted by Robssesed
(Speaking Part)
Spongebob: It's not about winning, it's about fun!
Plankton: What's that?
Spongebob: Fun is when you...fun is...it' like...it's kinda...sorta like a...
What is fun?? HERE...Let me spell it for you!

Spongebob:
F is for Những người bạn who do stuff together.
U is for bạn and me.
N is for Anywhere and anytime at all.

Sea Creatures:
Down here in the deep blue sea!

Plankton:
F is for ngọn lửa, chữa cháy that burns down the whole town.
U is for URANIUM...BOMBS!
N is for No survivors when you're-

Spongebob:
Plankton! Those things aren't what fun is all about!
Now, do it like this,
F is for Những người bạn who do stuff to- 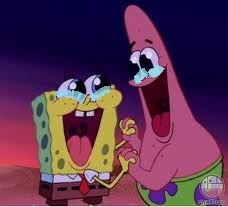 Crying about the mermaids together
A wonderful morning in Bikini Bottom. "dahyayaya!" Laughed SpongeBob. While he was busy laughing, a moving truck passed by. "Look Gary! Some people are moving in! The truck stopped at a new house tiếp theo to Patrick's. Spongebob ran to the house to great the people. The only 2 people who came out were a mermaid girl and a snail. "Hi! I'm SpongeBob! I live 2 blocks away and have a pet ốc, ốc sên named Gary! Visit me any time!" Bloated Spongebob. "Hi SpongeBob! My name is Anna. I moved here cause my boyfriend did a week ago." đã đưa ý kiến the mermaid. "I'll tell bạn when I see him!" đã đưa ý kiến SpongeBob skipping away...
continue reading...
3
all about spongebob
posted by drama821 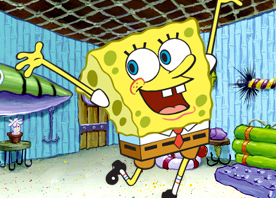 SpongeBob SquarePants(born July 14, 1986) is the eponymous character of the Nickelodeon animated comedy SpongeBob SquarePants. He was designed bởi marine biologist and animator Stephen Hillenburg, and is voiced bởi Tom Kenny. SpongeBob is a childish, dim-witted and eccentric sea sponge who lives in a pineapple in the underwater city of Bikini Bottom. He works as a fry cook at the Krusty Krab, a job which he is exceptionally skilled at. SpongeBob is very immature and is a constant annoyance to those around him, but he is very good natured
19
I tình yêu SPONGEBOB!
posted by spongybubbles 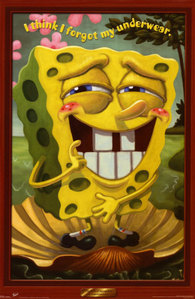 I think spongebob is the best programme ever.
My favourite character is the cá with the driving eyeballs beacuse he is really funny, and so is patrick beacuse he is stupid.
I also think nicklelodien should let nicktoons make all the spongebob games beacuse I think there alot better at making games.
Im confused how only spongebob can understand gary's meows and no one else can.
My một giây favourite character is patrick beacuse he's funny,dumb and stupid.
I think Plankton should just give up trying to get the krabby patty secret formula and just make his thực phẩm better, Manray and the Dirty bubble should...
continue reading...
2
f.u.n song
posted by spongebob7426
me: It's not about winning, it's about fun

me: F is for Những người bạn who do stuff together
U is for bạn and me
N is for anywhere and anytime at all

Down here in the deep blue sea

plankton: F is for ngọn lửa, chữa cháy that burns down the whole town
U is for uranium, bombs
N is for no survivors when you

me: Plankton those thing aren't what fun is all about
Now do it like this
F is for Những người bạn who do stuff to

me: Here, let me help you
F is for Những người bạn who do...
continue reading...
2002-present SpongeBob SquarePants Rant
posted by PeterMWou
Well let's be honest, SpongeBob SquarePants went downhill after the một giây season ended in 2001 when season 3 aired in 2002 and since 2002 which is 13 years ago, SpongeBob got worse. I mean, why people tình yêu season 3? I hate season 3. Season 3 and the movie from 2004 ruined SpongeBob SquarePants’s Stephen Hillenburg era. To be honest, I prefer Pokemon because Pokemon is going strong and they reduced SpongeBob's character to a blithering idiot, whereas before he was a sophisticated and lovable idiot. I simply cannot watch many episodes from Season 3 onwards like Rock A Bye Bivalve, whereas...
continue reading...
1
review on spongebob squarepants
posted by rahulms

SpongeBob SquarePants is an American animated ti vi series created bởi marine biologist and animator Stephen Hillenburg for Nickelodeon. The series chronicles the adventures and endeavors of the tiêu đề character and his various Những người bạn in the fictional underwater city of Bikini Bottom. The series' popularity has made it a media franchise, as well as Nickelodeon network's highest rated show, and the most distributed property of MTV Networks. The media franchise has generated $8 billion in merchandising revenue for Nickelodeon.

Many of the ideas for the series originated in an unpublished,...
continue reading...
Patrick and Spongebob: POSSIBLE GAYNESS?!?!?
posted by Hellowittykitty
Okay, none of bạn Spongebob những người hâm mộ kill me, because this I something I heard on YouTube. Patrick likes Spongebob thêm than a Những người bạn way. THE GAY WAY, to make it short and sweet. I heard from lots of people on YouTube, parodies, and animators that Patrick loves Spongebob. At first I believed they had a brotherly relationship, with nothing whatsoever that worried me to the point I have seen now. Sure, they may cry in each other's arms and occasionally give FRIENDLY hugs and high fives, but that doesn't mean their gay. Come on now. Super stupid. They are friends; if they were gay, that means that Nickelodeon would have to hủy bỏ the show. That's inappropriate. NO SE? If bạn don't, please message me hoặc bình luận in the bình luận box.