'The Hunger Games' is a block buster film from 2012 and now has a sequel 'The Hunger Games: Catching Fire'.
The ngôi sao Jennifer Lawrence plays the main character Katniss Everdeen who finds herself volunteering for her younger sister Primrose Everdeen and having to go to the capitol with Peeta Mellark played bởi Josh Hutcherson who also has to go and fight to the death in the games.
In Peeta's interview with Caesar Flickerman he đã đưa ý kiến that he has had a crush on Katniss ever since he could remember and Katniss doesn't take it lightly.
When they are in the games they are forced to seperate but when Claudius Templesmith says over the speaker that now two victors can be crowned if they originate from the same district Katniss hurries to find Peeta who is badly hurt and painted like a rock down bởi the river.
Katniss volunteers to take care of him and he eventually gets better but when it is down to the final three some muttations are formed and thrown into the game.
Katniss manages to push Cato off the Cornacopia with her bow and he is eaten bởi the mutts.
Then when Katniss and Peeta think they won they hear Claudius's voice saying now there can only be one victor.
Peeta immediatly says to Katniss go ahead,
shoot me but she would never do that but then she suggests that they both eat these highly deadly berries called nightlock so they don't have a victor at all but at the last một giây Claudius says stop, ladies and gentlemen I present bạn the victors of the 74th Hunger Games.
And from then on they don't know what to think about each other so they avoid one another until the big news comes out that they have to go back in the games in 'Catching Fire'. 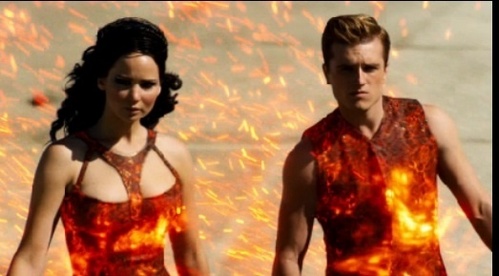