Chapter 6: Growing up with a rite of passage.
posted by EnchantdEquinox
Chapter 6: Growing up with a rite of passage.
Edward slowly walked into Renesmee’s bedroom, while she was still asleep. He knelt down in front of her bed.
“Hey Ness, I‘m going now sweetie” his hand stroking her forehead. Her eyes threatened to open.
“When will bạn be back” her eyes opening as her voice went from groggy to normal.
“I‘ll be back in a week hoặc two” he smiled when she grabbed his hand and said.
“Be safe, dad”
“I tình yêu bạn Renesmee” he kissed her forehead and walked out of her bedroom. Edward, Emmett, Jasper and Carlisle were going on a camping trip, leaving Renesmee there with the girls of the house.
“Alice are bạn absolutely sure? bạn know how subjective your visions can be, especially concerning Nessie. She is just so young!”
“Yes, Bella, I’m sure. This is not something bạn choose, it just happens. Like the weather and I’m always right about the weather.”
Great, now we’re going to discuss the weather? What is going on?”
Alice turned to look at Renesmee.
“Nessie, how old are bạn now?”
Okay, from the weather to my age, why does everyone worry so much about my age? It’s freaking hilarious. No one in my entire family has a realistic age! Three-hundred year-old Carlisle tries so hard to look older, but he barely passes for thirty. Dad is almost one hundred years older than Mum, but they’ll both be teenagers forever…
“Umm… it’s not a difficult câu hỏi Nessie.” Alice was still waiting for an answer.
“Actual Age hoặc Earth Years?”
Alice just smirked, raised her eyebrows and waited. Renesmee knew no one counted Earth Years except her mum.
“My AA is sixteen but I’m due for an update tiếp theo week.”
“Did bạn hear that, Bella? sixteen.”
The Actual Age những thông tin cập nhập were Carlisle’s idea. Renesmee had grown from a tiny seed to a fully formed infant in less than two months. She was born with a full set of teeth and she could talk when she was only a week old. At three months, she could run. She had read the entire Harry Potter series twice before her first birthday.
Everyone, except Bella, agreed that it made thêm sense to calculate Renesmee’s “Actual Age” bởi evaluating her physical, intellectual and emotional growth. She wasn’t too crazy about the updates; it involved those darn needles and lots of boring educational and psychological tests.
The only good thing about the constant những thông tin cập nhập was every time she passed a major benchmark Alice would throw a party.
“How much biology have bạn studied, Nessie?” Alice’s voice interrupted her thoughts.
“Not much, why? Dad says I need to master chemistry and physics first. Besides, I like art and literature much thêm than the sciences. So I don’t really care.”
“This is crazy! But it also sounds just like Edward! We need to put someone else in charge of your education.” Alice paused and asked,
“Has anyone talked to bạn about puberty hoặc menstrual cycles?”
“Well, I think puberty is when humans are old enough to have babies. But I haven’t heard anything about men’s true cycles.”
“Oh dear,” Alice sighed.
“I can’t believe this!” Alice narrowed her eyes and shot a disapproving glance at Bella. She turned back to Renesmee and then kindly asked, “Do bạn know how em bé are made?”
“Alice! One thing at a time.” Bella groaned and pinched the bridge of her nose, a habit she had acquired from Edward.
“Seriously? Come on, Aunt Alice, everyone knows that,” Renesmee scoffed.
“Well the father’s rockets fly to the mother’s moon and then the moon turns into an infant over time then, its ready to come into the world”
“Where did bạn hear that story?” Alice asked, obviously laughing.
“Auntie Rose.” Alice, Bella and Esme all looked at Rosalie with matching expressions of incredulity.
“Sorry, but that was basically the story I got the first time I asked. Only instead of ‘it’s ready to come into the world‘, the midwife came and helped get the baby out through the belly button. I knew Nessie wouldn’t believe that. To be fair, Nessie’s AA at the time was only fourteen.”
“Will somebody please tell me what is going on?” Renesmee begged.
Alice darted upstairs and was back in less than a second. She inserted a DVD into the audio-visual system, grabbed the remote and pulled Renesmee down onto the đi văng beside her.
“I thought we might need this soon, so I picked it up on my last trip into town as well as a few supplies. Why don’t we all watch this together and then we can answer any các câu hỏi Renesmee might have.”
The content of the “Puberty for Dummies” DVD was presented in an overly simplified manner, so when Alice asked if she had any questions, Renesmee Nodded her head.
“Yeah I do. How do the ‘rockets‘ manage to get to the ‘moon‘?”
Renesmee was thêm than embarrassed. She was disturbed and confused.
“But bạn đã đưa ý kiến I was a surprise. How could that be a surprise?” She couldn’t hold back a reflex shudder.

*The tiếp theo morning*
There’s just no way to hide the scent of blood from a house full of vampires. Renesmee woke up with bad cramps surrounded bởi all the woman of the family. Esme, Alice and Rosalie were beaming at her, and Bella was trying hard to smile, not quite pulling it off.
Alice leaped gracefully onto her giường and held out two boxes.
“Which do bạn prefer Ness? Pads or….”
Before she could finish the question, Esme, Rosalie and Bella exclaimed in agreement,
“Pads!” they all started to laugh, even Bella. Renesmee might have gotten mad at them for laughing at her but it was such a relief to see her mum smile again, that she just joined in and laughed until she cried. Then she cried. For real. She didn’t know why she was crying but she was. Bella hugged her and said.
“It‘s okay sweetheart”
After she showered and got dressed, she was afraid to go out into the common area where everyone hangs out when they aren’t in their rooms. Alice knocked on her door and then waltzed in without waiting for an invitation. Renesmee looked at her with reproach, but Alice just smiled and said,
“You were going to invite me in another thirteen seconds. Come on! Let’s go! We’re going to have a party!”
Renesmee usually loved parties, but she didn’t want to leave her room just yet.
“Not today Alice, I think I’ll just hang out in my room, OK?”
“No it is not OK! I refuse to let bạn start diễn xuất like your mother! Now come on!”
Alice continued to drag her into the commons. She had cards and presents from everyone, even the guys. Everyone knew she had to open Alice’s gift first, even Alice, but she still bounced around on her toes chanting,
“Mine first! Mine first!”
Renesmee lifted the lid, and pulled back several layers of pastel tissue paper. She didn’t recognize the lacy little scraps of fabric at first. Pink, purple, red, black and white seemed to float on air inside the box. Renesmee’s face turned bright red as Alice plucked one of the items out of the box and held it up to her chest as if checking to see if it fit.
“Alice! That is not appropriate for….”
“Oh come on Bella! She isn’t a little girl anymore! And bạn have to agree that these little bras and panties are quite modest, yet still feminine…”
“Thank bạn Alice” Renesmee gushed just to make her stop talking about underwear!
“Aunt Alice, when did bạn know that this was going to happen? I mean, it would have been nice to have a little thêm warning.”
“Nessie, when was the last time bạn looked in a mirror? I didn’t have to see the future to know this event was about to happen.” Alice looked at Bella with a smug little smirk on her face and reprove,
“anyone who was paying attention could have told bạn what was happening.”
“Nessie, open mine and Uncle Emmett’s next.” Rosalie handed her a small black velvet box. Renesmee sighed with happiness as she lifted a single ngọc lục bảo suspended from a delicate silver chain.
“It’s beautiful, Aunt Rose. Thank bạn so much!”
“It was Emmett’s idea. It belonged to his grandmother, and he really wanted bạn to have it.”
“But, Aunt Rose, shouldn’t bạn have it?”
“No Nessie, we both want bạn to have it. Your eyes really are the perfect colour for emeralds.”
Jasper’s gift took her breath away. It was an authentic civil war fife. His card stated simply,
“This belonged to a friend of mine; I look phía trước, chuyển tiếp to hearing bạn play it.”
“Aunt Alice? Are bạn sure?” These gifts are so extravagant.
“Of course sweetheart!”
Bella handed her a black A4 sized case. Renesmee smiled at her mother. She opened the lid slowly, to see an oval shaped locket. She picked it out of the case and looked amazed. She looked back at her mum and leaped at her to give her a hug.
“Thank bạn so much mum, this is perfect” Bella hugged her back.
“I’m glad bạn like it Ness” Renesmee sat back in her seat.
“I tình yêu it” Alice helped Renesmee put it on.
“This is from both of us.” Esme handed her a heavy green box. Inside, wrapped carefully in archival paper, was an ancient Bible. The well-preserved leather cover appeared incredibly fragile. She sat it down on the bàn with reverence knowing exactly what it was, knowing that her name and ngày of birth was inscribed in that ancient tome under her parents names. The entire Cullen family cây was in that book.
“Esme, this is too much. bạn can’t give me Carlisle’s family Bible!”
“Yes we can, Renesmee and we insist bạn take it. Your studies of historical preservation qualify bạn to care for it properly. Besides, who better to give it to than the only member of our family that can pass it on to her children?”
That’s when she realized this was thêm than just a rite of passage celebration. Each gift was a family heirloom; a priceless treasure that should have been handed down from father to son, and mother to daughter. There would be no sons hoặc daughters for Rose and Emmett, Alice and Jasper, hoặc Esme and Carlisle. All of their human hopes and dreams had died years ago, when they became immortal. Renesmee’s coming of age was a new beginning for all of them. Her children would be their children. For the first time in her life, Renesmee was thankful that she was indeed half-human. 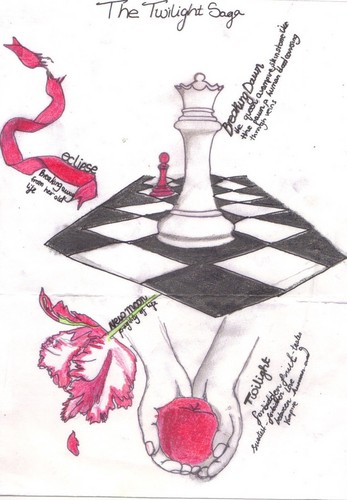 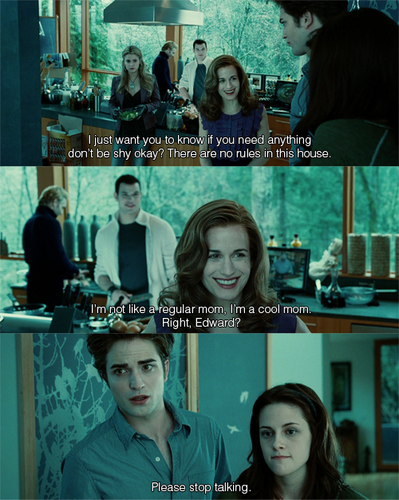 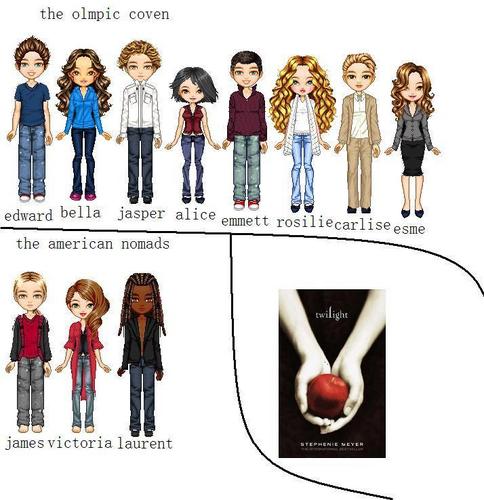 5
twilight
added by TDItwin
Source: me 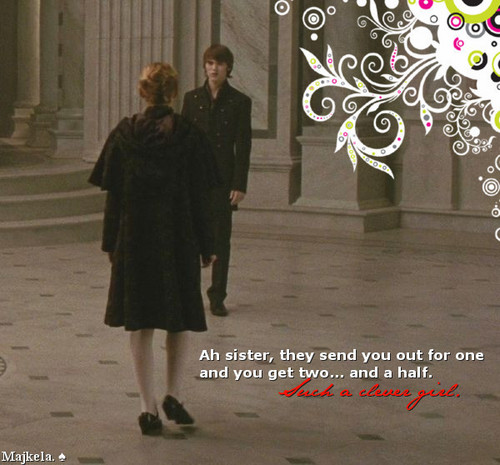