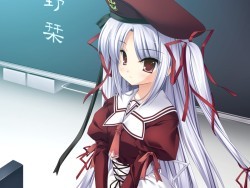 Shiori Momono (百野 栞 Momono Shiori) is one of the protagonists of 11eyes. She is a "traditional magus" and is usually seen with a book.