1
Paradise; Chapter2: Kyrios
posted by K5-HOWL
"I’m a wolf, an outsider, hated and feared; I belong nowhere, nowhere, except Paradise"(K5-HOWL)

Before bạn assume that, I am a chó sói, sói well I am not. Do not be disappointed though bạn will get your Người sói in my story and much more. I guess my introduction is over playing itself but don’t worry it’s only a little bit longer

I lived in the small-rebuilt town on Kyrios. Yes, I đã đưa ý kiến Kyrios, now then who remembers Kyrios. Anyone? Well then, burned to the ground many a years cách đây Kyrios was bởi Jaguara’s troops. See now they were hunting down a pack of wolves, and sadly, the only survivors were Quent and his dog Blue. With raging hatred, they hunted down Người sói until the end of the earth. Oh, trust me there is thêm to their story but that is in another time, in another story.

Well so, Kyrios soon flourished with life once again yet no one will ever forget what took place here even if it is assumed a fantasy. Paradise, a fantasy? Humph, what do they know anyway? 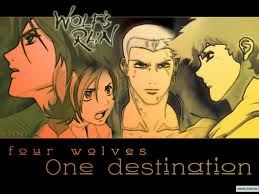 1
Wolfs Rain - Is there a hero
added by K5-HOWL
help alaskas Người sói and all animlas and Người sói
video
4
Paradise; Chapter1 : Dreams
posted by K5-HOWL
“They say there's no such place as paradise, even if bạn searched to the ends of the earth there's nothing there, no matter how far bạn walk its always the same road, it just goes on and on, but in spite of that why am I so driven to find it, I hear a voice calling to me. “ (Wolf’s Rain Episode 30)

I was running, running free, in fields full of Lunar Flowers. The sky was a gentle blue of being cloudless and gave off a warm smile. Suddenly everything changed; the sky no longer held a smile as it turned gray and black with ash. The Lunar hoa were on fire, entering their deathbed that...
continue reading...
More Cards
1234567891011