hơn một năm qua angel-winged said…
Didn't want this forum to go to waste so I decided to post my character here. Hope I did this right.

Appearance
Ryssa is a girl of slender build, 5'6" tall with waist logn scarlet red hair. She has an angular heart-shaped face with a small button nose, large almond shaped black eyes(they're actually dark green), black eyebrows and plae complexion. Her hair is mostly lightly wavy and has diagonally cut bangs that fall over her face and reach her chin. For reasons unknown, when exposed to direct sunlight, her scarlet hair turns a rose pink color while a male red-headed Manalis' hair would darken until it turned completely black.
Across her back, she has an intricate tattoo of a Phoenix in dark red ink, she had done when she was 6 and went to Braavos for the first time.
Ryssa normally wears knee-length tight long-sleeved dresses with high aisan neckline, leather pants and black lather boots while braiding her hair in complicated patterns across her scalp. Her favorite dress was made by her mother for her nameday and is a deep red with a beautiful embroidery of flames turning into Phoenix feathers on the sleeves, hem and neckline.

Skills
weapons skills: Ryssa has masterful expertise with swordplay and archery. The only marksman better than her is younger sister, Niantine. Ryssa is particularly talented with her dual sai-like blades she has with her at almost all times.
smithing: Like most people of Forgehammer, Ryssa is well-versed in the work of blacksmiths and has actually made her own weapons and armour at the age of 15.
acrobatics: Thansk to her small and light form, Ryssa is a very skilled acrobat and hand-to-hand combatant making her lethal without the need to use cold arms. She is also quite flexibile further helping her acrobatic skills.
music: Aside from her fighting skills, Ryssa was raised as a true lady (even if she refuses to act like one at most times) and plays a number of three instruments; the flute. the hapr and the lute(guitar). She is also a talented singer, like all members of her family, and has a knack for storytelling and taking care of children with the large number of her siblings. Ryssa is an excellent dancer as well.
languages: Aside from speaking Westerosi, Ryssa speaks some High Valyrian and reads it fluently.

House info
House: House Manalis
land: the Ashlands( the mountains and plains just south of Shadow Tower, named due to the ashy gray colour of the ground, very rich with metals though not many precious, 'The Forge of the North', not very populated, warrior like people who are skilled with the sword as much as with the smithing hammer)
seat of power: Forgehammer aka. 'The White Keep' ( got the nickname due to the pure white colour of the castle against the black colour of the mountain it is built upon, carved into the mountain, at the bottom most level are forges and shith shops which keep the entire mountain comfortably warm with the constantly lit fires, on the middle lever is the town and most of the inhabitants, on the top level is the keep itself)
sigil: a scarlet Phoenix rising from ashes on a field of silver-blue
words: 'From ashes, we rise!'
House blade: a Valyrian steel sword named 'Whyteblade' that is reforged with every new owner
founder: Adndar Manalis(formerly known as 'Snow'), a bastard son of a Stark king
aproximate time the House was founded: 400 years before Aegon's Landing
liege lords: the Starks
status in the War of the Usurper: neutral

Story: If interested, please go read my story called 'Phoenix amongst Wolves' on fanfiction.net! :D
The pic is Ryssa in her usual dress and in her formal dress. :D 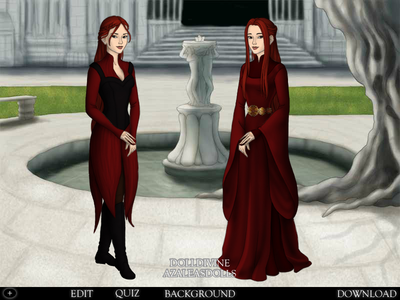 hơn một năm qua TheHound1 said…
Brilliantly thought out and a beautiful picture - love it! I was going to think of a character, but don't quite have the imagination that you do!

hơn một năm qua angel-winged said…
It's actually very easy since Ryssa and her family are mainly based on my own.Wen it comes to their House and its features, my brother helped me (for the most part). The hardest part is naming the characters. In that, I found that online fantasy name generators give excellent ideas. There's one that covers basically every possible name option you can imagine; from real and pop culture inspired names, to description for characters and landscapes.
Something to say? Sign in with one of these options:
Log in to Fanpop! Not yet registered? Create a new Fanpop account!