4
The Host chapter 1 part 9
posted by HaleyDewit
Katherine was lying lazy on the bed, looking bored at the ceiling. She would kill Klaus for taking her bracelet. Correction, she would let Damon kill him. She was really strong, but yet no match for the Originals. Not that Damon was, but if she had to choose, she believed her afterlife to be thêm worthy than Damon’s. “Geez, hurry up” she mumbled frustrated. Being locked up in this room was getting on her nerves. And why did the sun have to shine so bright? There was nothing interesting in here and bạn could only examine Damon’s rubbish so many times. After a while it’s not fun anymore. The door went open and Katherine got up. Finally, she thought. Damon and Elena walked in, looking both bedraggled, which made Katherine immediately suspicious. “What have bạn two been doing?” she asked slowly. Damon and Elena shared a look. “It’s not what bạn think” Damon said, with a nearly unnoticed undertone of disappointment. “The car broke down and it’s storming outside, but I bet you’ve heard the rain” he explained. “And bạn ran through the rain?” Katherine asked contemptuously. “Something like that” Damon replied. Right after Bonnie had cast the spell the sky had chẻ, phân chia, split open and it started raining. Bonnie had suggested to let Elena shelter in her house; Damon would have to go trang chủ alone and Bonnie would give Elena a lift to her house. Damon had walked away already, because he believed Elena would accept Bonnie’s offer. But when he tried to start the car he saw Elena in front of the car. He let the window down. “Do bạn have a death wish hoặc something? Get out of the way!” he yelled. Elena walked to the passenger’s side and got in. “I’m coming with you” she said. “Really?” Damon asked suspicious. “Damon, I ran through the rain. I’m soaked. Don’t go câu hỏi my honesty now” Elena said. “Okay, I just… I assumed you’d stay with your friend” Damon đã đưa ý kiến still surprised. “You assumed wrong” Elena đã đưa ý kiến calm. Damon focused on the car again, with no success. “I can’t get him started” he đã đưa ý kiến annoyed. “Yeah” Elena đã đưa ý kiến pointing at the gas meter. “You forgot to gas” Damon looked and groaned. “God, talking about cliché. Okay, we’ve got two options. We stay here until it stops raining, which could take hours. hoặc we run” Elena stared at the rain. She knew what she wanted, but that didn’t make it the best option. She sighed and looked at Damon. “We can’t let Katherine wait any longer than she has to” Damon nodded and took the car key before getting out. He open Elena’s door and helped her out. He threw her arm around his shoulder and lifted her in his arms. “Ready? Hold on, here we go” And they raced away.
“Here’s the necklace” Damon đã đưa ý kiến and he threw the chuỗi hạt, chuỗi hạt cườm to Katherine. She caught it. “You’re not going to tell me what happened, are you?” she said.
Damon and Elena shared another look. “Nope” Damon said.
RedHood591, TheExcorcist and 2 others like this
stylediva121 oooh cant wait to read what happens next.
HaleyDewit :)

1. Elena brings out Damon's humanity
2. Elena is the ONLY female main character who hasn't been bitten bởi Damon yet.
3. In the một giây episode, Damon says that he can clearly see why Stefan is so smitten with Elena....because of course, Damon is smitten with Elena himself.
4. Damon needs someone sweet like Elena in his life to heal his broken heart.
5. Damon kisses Elena's hand when she goes to leave.
6. Elena saves Damon, and is clearly scared for him.
7. Damon is so gentle towards Elena, especially in the episode when he strokes...
continue reading...
-4
The Darkest Side Of Me ch.3
posted by yasmeen40
originally written bởi : SuchALittleMonster on FanFiction.net

In the blink of an eye he was up on his feet, he was perfectly fine. I felt the tường against my back, I had no where else to go. Surprisingly he didn't...
continue reading...
36
In The Books: Evidence That Damon Is In tình yêu With Elena and Only Elena
posted by LotusWhispers

***Bear in mind, there are way thêm trích dẫn than this proving it, but these are the main ones!***

Because Stefan thinks so:

"You should keep using it, Stefan đã đưa ý kiến voicelessly. Your influence over him is strongest."
- Stefan to Elena, about Damon. Midnight.

"Of one thing I am certain: he would never harm you. He loves you. How can he help it?"
- Stefan, on Damon, in a letter to Elena. Nightfall.

“You can pretend bạn don’t care. bạn can fool the whole world. But I know differently."
- Stefan, about Damon missing Elena. Dark Reunion.

Thank bạn for nghề viết văn me such a beautiful, kind email. Yes, I think epic is the word for the tình yêu Elena and Damon have for each other in Midnight. I mean, she completely destroys a moon for his sake. I wrote a lot about Damon and Elena—and Bonnie and Damon, too—to hiển thị that Damon is finally discovering his deepest feelings. In the case of Elena, they amount to three simple words that makes Stefan think that Elena no longer loves him. He thinks that she simply wants to be with Damon now—and after all she does, it’s hard to blame him.

8
look at this!!!
added by jensen_ian06
Source: tumblr.com

2
"..There was no world for her if there was no Damon."
added by Leytonfan4ever
Source: http://seeyouinnextlife.tumblr.com/page/2

4
Ian & Nina ♥ Behind the Set
added by TVD_rocks 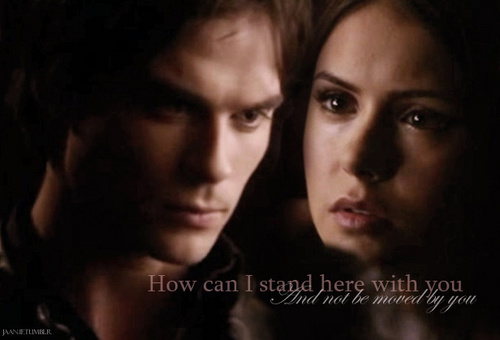 Moved bởi you...
added by DaniKatZ